What is the Mappers' Guild?

In short, it's a group of mappers responsible for creating maps for osu!'s featured artists! You may have seen our maps included in map pack/hush hush medals, as well as news posts like...

The Mappers' Guild has expanded from its initial 40 users to more than 500 today. Through this website and automated functionality, we're now able to bring in more mappers (potentially including you)! 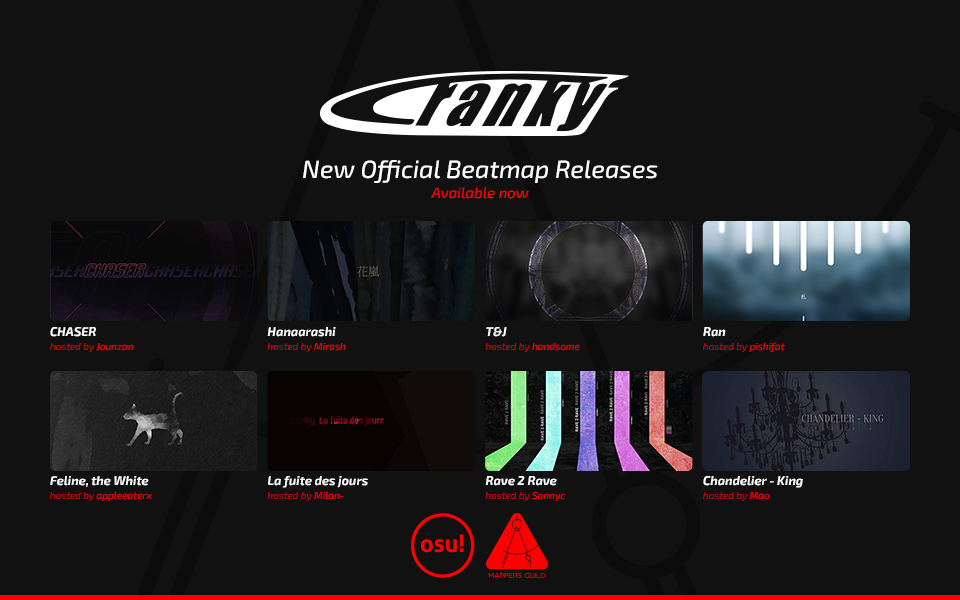 How does the Mappers' Guild work?

In addition to making maps of music licensed by osu!, the Mappers' Guild has similaritiess to any other MMO-style guild. We support subgroups of mappers (parties) working together to create map packs for specifically assigned artists or other content (quests). By creating maps and participating in the mapping process, a user can earn points and level up to receive rewards!

For example, a quest's objective could be "create 5 mapsets of songs from Camellia", necessitating a party of 5-10 members and completion within 3 months.

If a party accepts and completes the quest according to its rules, each party member will be rewarded point bonuses. If a party drops the quest, they will lose points.

Parties are groups of mappers who register to complete quests together.

Special quests require higher ranks to participate in. For a party to qualify as a higher rank, at least half of its members must be the required rank or higher.

Quests and parties are rewarding ways to get involved with the Mappers' Guild, however our main goal is to produce maps for osu!'s featured artists, and that can be done however you prefer!

Why join the Mappers' Guild?

By creating maps through the Mappers' Guild that abide by our rules, you can earn rewards!

Depending on a user's rank within the Mappers' Guild, they can have access to special quests + upcoming Featured Artist showcase opportunities (unlocked at rank 1) and the ability to design quests (unlocked at rank 2). Additionally, ranked users earn one of three profile badges:

Points are earned through a few different Mappers' Guild activities:

Difficulty points scale according to a map's drain time, with the midpoint being around 2.5 minutes. Collaborative difficulties split points evenly between users.

All mapping-related points are rewarded upon a map reaching Ranked status. Storyboard points are subjectively determined by storyboard content (2, 7.5, or 10 points for minimalist, typical, and extraordinary content)

Contest points are earned through involvement with the Monthly Beatmapping Contest

Maps created through the Mappers’ Guild will be used in medals and occasionally as promotional material.

Many quests will have their own themed medals, while other unrelated mapsets will be grouped under a general Mappers’ Guild medal. Special quests involving unannounced featured artists will additionally be used as promotional material in news posts when applicable.

Mappers' Guild mapsets that include difficulty spreads beginning from an Easy difficulty are elligible to be bundled in new installations of osu!.

How do I join the Mappers' Guild?

If you have 3 or more ranked maps, you can join the Mappers' Guild by clicking the button below and authenticating through your osu! login. If you don't meet the requirements, you can still view the pages, but you can't interact with them!

Additionally, we recommend reading the frequently asked questions page to better understand what you may be doing as a member of the Mappers' Guild.